The kids had started to call me Dad... 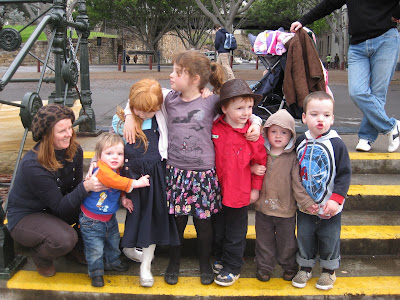 I thought about family and how it's constructed after hearing a patient say this one day. He had ended his brief relationship with a woman and his regret was expressed in the statement about the children starting to accept him into the household.

The word pitiful keeps coming to mind, not because I despise what he is saying, but because I pity his fear. The subtext of what he told me was that the child calling him dad had actually provoked fear in him and then he had left the relationship. Either he did not want to take on that role in the family (or at least not yet) or he was afraid of failing if he stepped into it.

I think we ignore the transience of family in our current culture. I do not generally talk of classes of people, but I think there is a group (or perhaps) class of people, in Australia, who operate in a very matriarchal fashion. Family units are made up of a woman with one or some children, and men transiently move in and out of families. Relationships begin explosively and intensely, bringing new partners quickly to assume to male role, which children link with dad. Men relate to children because of their connection with a child's mother rather than because of a distinct and precious connection with the child.

With time, this can develop to be more balanced and the male can become and effective 'father' in the family. However it can be really difficult for a man, in this dynamic, not to feel like an interloper who must compete with the kids for the woman's attention or love. I am not arguing that blended families are bad, only that they can promote unhealthy dynamics when they begin so quickly and reactively. We also see the effects of uncertainty about male members of the household and where they fit, later on when teenage sons have difficulty in behaviour and discipline. This is not always the result, but I'm postulating that the insecurity of the male position in this style of family would influence how a maturing male will relate within that family.

Some posts on my other blog about psychiatry